Camp is being led by Salve Regina University’s Head Coach Jennifer Foster, her staff, and current players. With our 3 Day/2 Night Camp model we are maximizing play and utilizing the amazing collegiate facilities Salve Regina has to offer to train at the highest level. Join us for what promises to be a great week of competitive and fun field hockey. With a history of selling out this camp for sure will not disappoint! The camp is open to ages 10-18 and we encourage all experience levels. Every camper will receive a reversible jersey, cinch bag, and a chance to win other cool prizes!

Jennifer Foster is in her 16th year as head field hockey coach at Salve Regina University. Coach Foster was voted CCC Field Hockey Coach of the Year in '15. She also was the head women’s lacrosse coach for eight seasons.

Salve Regina field hockey had a record breaking 2015, finishing the season 17-5, which set a new school record for wins. The 2015 season was also the program’s second consecutive year earning a ECAC postseason bid. The team finished the season playing in the ECAC Championship game. The 2015 success followed up a 2014 season where the team finished 14-8, earning its first ever ECAC bid.

Off the field, the Seahawks have enjoyed success as well. In 2019 the team earned its 13th consecutive National Field Hockey Coaches Association (NFHCA) Academic Team Award.

Coach Foster began her collegiate career at Nichols College, where she garnered CCC Rookie of the Year honors after finishing third in both goals and points for the Bison. A National Field Hockey Coaches Association (NFHCA) Division III Academic Team selection at NC, Foster then transferred to and graduated from Bryant College in 2004. She helped the Bulldogs advance to the NCAA Division II Final Four in 2002 and 2003. For her efforts, Foster earned NFHCA Division II Academic Team and Northeast 10 Conference Commissioner's Honor Roll Gold Scholar accolades each of her three years in Smithfield (2001-03).

Prior to her arrival at Salve Regina, Foster worked with PUMA North America, Inc., as a customer service representative and training specialist, where her performance resulted in promotions for several of her trainees. She also worked with the New Hampshire Fisher Cats minor league baseball club, where she organized clinics and coordinated players, coaches, and over 800 participants.

Check Out- The final session of camp will end at 12pm and extended day campers are dismissed at the fields. Check-out for overnight campers will be from 12-1pm at Miley Hall.

Age & Ability- Open to participants aged 10-18 years old. All levels of ability are welcome and we encourage beginners to attend!

Equipment Needed- Participants must provide all equipment to participate which includes a stick, shin guards, and mouthguard. Every camper will be provided a reversible jersey, cinch bag, and other camp prizes!

8:15am Camper Meeting *BE DRESSED TO PLAY

8:15am Camper Meeting *BE DRESSED TO PLAY

I was afraid the whole camp was going to feel like just some easy vacation where we sat around and got lectured or watched training videos. Nope! It felt like a real adventure, even though we were learning the whole time.

The food was good. The coaches were awesome! We worked hard, but it was so much fun and I already want to go back.

The drive home from camp was silent. They slept the whole way. Thanks for a great week. 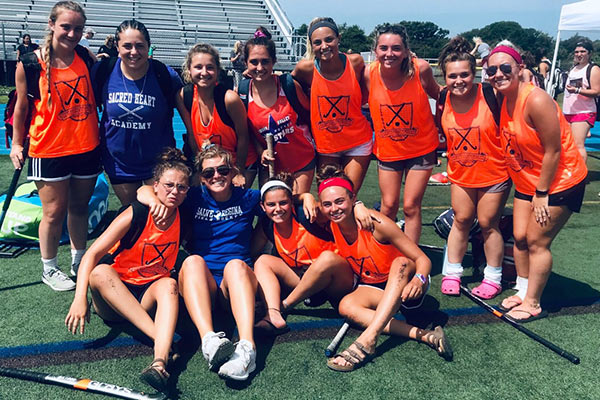