Curious what the difference maker was for the All-Americans of last season; Summer Field Hockey Training Camps!

Lake Forest Academy is located just 30 miles north of Chicago in one of the most beautiful suburbs on Chicago's North Shore. Lake Forest provides a secure, supportive environment for our campers. Our staff of college coaches & players are committed to helping campers build sound fundamentals and establish strong game awareness.

Covid-19 Policy: Proof of Vaccination OR proof of negative COVID PCR test within 72 of camp IS required prior to arriving at camp. In addition we ask ALL CAMPERS to bring in their health forms and the Athletic Monitoring Form to camp check-in.

Coach Jill, most recently the associate head coach and recruiting coordinator at Wesley College in Dover, Del., enters year 3 as the head coach at The College of Wooster in 2020.

Coach Jill's impact on the program was felt immediately, as Wooster won six more games than the season prior, and advanced to the championship game of the North Coast Athletic Conference Tournament for the first time since 2010. Three Scots were named to the National Field Hockey Coaches Association All-Great Lakes Region Team, while five garnered All-NCAC honors.

Coach Jill started at Wesley as an assistant coach in 2014, and was elevated to the program's associate head coach and recruiting coordinator for the 2017 season. While with the Wolverines, her student-athletes earned seven All-Capital Athletic Conference certificates, and competed in a league consistently in the upper echelon of Div. III field hockey conferences. CAC institutions have captured four national championships in the 2000s, and have had three teams ranked, or a combination of ranked and those receiving votes, in the year-end NFHCA poll in four of Dixon's five years in Dover.

Among the highlights from Dixon's tenure at Wesley was the play of senior back Emily Wagner, who tied for the national lead with 12 defensive saves in 2017.

Coach Jill is familiar with the NCAC, and in fact, squared off against Wooster four times during a two-year stint as the lead assistant at Oberlin College. While with the Yeowomen, she tutored a quintet of All-NCAC honorees, including Claire Yeske, who went on to earn all-region honors from the NFHCA.

Outside of the collegiate ranks, Coach Jill has coaching experience with USA Field Hockey's Futures Program. Originally a selector, Dixon has climbed the ladder and most recently served as the head coach for the Delaware region. Dixon holds a USA Field Hockey Level II coaching certification.

As a student-athlete, she was a two-sport standout at Randolph-Macon College. In field hockey, Coach Jill was a four-year starter and earned a trio of All-Old Dominion Athletic Conference certificates. She played both forward and midfielder, and led the Yellow Jackets in points as a junior with 18, and logged 30 career goals. Dixon was also a two-year starter on the women's lacrosse team.

Coach Jill, a double-major as an undergraduate, earned her bachelor's in biology and mathematics from Randolph-Macon in 2009, and a master's in sport leadership from Wesley in 2017.

Covid-19 Policy: Proof of Vaccination OR proof of negative COVID PCR test within 72 of camp IS required prior to arriving at camp. In addition we ask ALL CAMPERS to bring in their health forms and the Athletic Monitoring Form to camp check-in.

I love how you all really take the time to understand my players’ needs. That just makes your skill and technique training all the more effective.

I keep telling my friends this was the best summer of my life! Some of them haven’t even played field hockey before, but now they’re thinking about trying out because they want to go to camp next summer.

This was a healthy experience for our whole family. Sammie trained with great coaches and talented athletes and we got a few days of quiet! 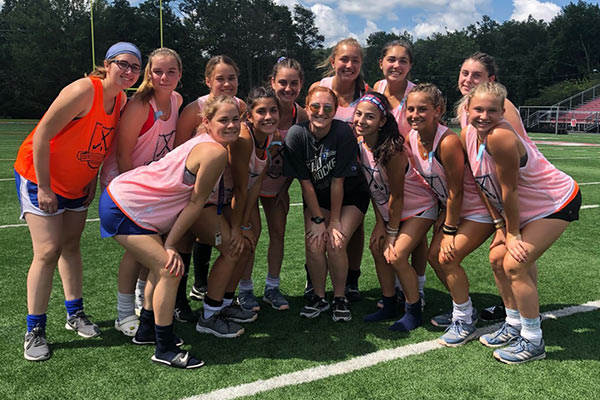