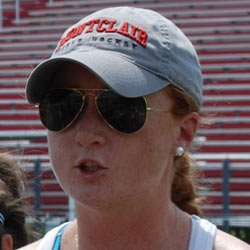 Eileen O’Reilly begins her fourth season as the head coach of the Red Hawks in 2018. She became the 17th coach in program history in June 2015.

In her first three seasons, O’Reilly has fashioned a 47-15 record which includes berths in the NCAA Division III Field Hockey Championship each of the last two seasons, a feat accomplished only one other time in program history.

O'Reilly led Montclair State to a 15-5 record and a berth in the NJAC semifinals in her first season. The Red Hawks finished the year ranked 11th by the NFHCA and placed three players on the All-NJAC Team, including Megan Roeloffs who would later be chosen to the NFHCA Division III All-America Second Team.

O’Reilly followed up an impressive first campaign with an even better one in 2016 as the Red Hawks returned to the NCAA Division III Field Hockey Championship for the first time in three seasons. Montclair State posted a 16-6 mark and was ranked in the National Field Hockey Coaches Association Division III poll throughout the season ending the year at No. 10. The Red Hawks also went 5-1 in the New Jersey Athletic Conference and advanced to the conference’s championship contest for the first time since 2013.

Montclair State placed five players on the NJAC All-Conference Squad with four being named to the NFHCA All-Region Team. Senior Camille Maimone was selected to the All-American Team and joined Roeloffs as participants in the NFHCA Senior All-Star Game.

Last season the Red Hawks registered their third consecutive 15-win season under O’Reilly and were once again a fixture in the NFHCA Division III Poll finishing the season in the Top 15. MSU won its first 12 contests, it longest winning streak in four years which helped Montclair earn an at-large berth into the NCAA Tournament.

Along with its success on the field, O’Reilly’s teams have enjoyed just as much off it as well. Each season the Red Hawks are well represented on the NJAC and NFHCA Academic Teams and Meghan Mollahan was chosen to the prestigious Google Cloud Academic All-America Team in 2018. Field Hockey also claimed the Highest Team GPA Award handed out by the athletic department.

O'Reilly came to Montclair in 2013 and spent the first season as an assistant coach before being elevated to Associate Head Coach in December 2014. Montclair put together a 35-7 mark in those two years. O’Reilly mentored the attackers and midfielders and was instrumental in helping Montclair to the program’s second consecutive New Jersey Athletic Conference Championship and an Elite 8 appearance in the NCAA Tournament in 2013. The Red Hawks set a new single-season mark with 86 goals and boasted two of the conference’s top 10 scorers. MSU led the league in scoring margin and were ranked second in goals per game and scoring average.

In addition, O’Reilly was also involved in all aspects of the program, including practice planning and video editing as well as recruiting and fundraising. She implemented the Red Hawks’ “Leave a Legacy” campaign in 2014 which raised over $10,000 towards locker room refurbishment.

Prior to her arrival at MSU, O'Reilly enjoyed two successful seasons as the top assistant at Manhattanville College. During her second season with the Valiants, O'Reilly helped guide the unit to an overall record of 11-8, including a stretch of the season that saw Manhattanville win six-straight contests, three straight coming in overtime. Under her guidance, the Valiants also produced its first-ever All-American, as Amanda DeChent was named to the NFHCA All-America first team. In her first season at Manhattanville, the squad tied the best start in program history after winning eight of the season's first nine games and also reached the Freedom Conference Tournament for the first time in six years as the fourth seed.

O'Reilly arrived at Manhattanville after a decorated four-year career on the field hockey field at Franklin & Marshall College, where she was a four-year starter and senior captain for the Diplomats. She was named to the NFHCA All-South Region and All-Centennial Conference first team as a senior after scoring nine goals with 11 assists for a career-high 29 points, following up an All-Conference second-team honor in 2009. She finished her career as the school's all-time leader in assists (35) and game-winning goals (eight), while also ranking fifth in points (95) and ninth in goals (30). Off the field, O'Reilly was a four-time NFHCA and Centennial Conference Academic Honor Roll honoree and the 2011 recipient of the Karvasales Award, which is given to a Franklin & Marshall female senior athlete with cumulative outstanding athletic achievements over a four-year period. She was selected as the Centennial Conference's nominee for the 2011 NCAA Woman of the Year Award and participated in the conference's 2011 Snell-Shillingford coaching symposium.

Beth Gottung, former Montclair State Head Field Hockey Coach has led the Red Hawks to victory for the past 13 seasons. Coach Gottung earned her 200th win during the 2014 season to become only the 9th coach in MSU program history to receive this honor (earned her 100th win in the 2nd game of 2009 making her the most successful coach in the history of the program). The Red Hawks were New Jersey Athletic Conference champions in 2012 and 2013, playing for a National Championship in 2012.  Beth was The New Jersey Athletic Conference Coach of the Year in 2003, 2011 and 2012. She was also South Atlantic Regional Coach of the Year in 2003 and 2012 and 2013.  Gottung has recently taken a role in University Advancement at MSU but will continue to serve as an assistant coach with the field hockey program.
More about Beth's new roles at MSU Click Here

We traveled from another state to attend this camp so our daughter could get exposure to a different group of players and coaches. We have had good experiences Revolution camps in the past and this camp was no exception. Very well run camp.

We really appreciated the individual attention the coaches gave to our daughter. They really took the time to go over what she needs to work on to improve her game. She asked to bring her stick on our family vacation; just to be sure she is ready for pre-season a couple of weeks away.

I had such a good time at camp. The coaches were great, and so was the food. We had so much fun staying in the dorms like we were in college.