Revolution Field Hockey, a USA Field Hockey Partner Camp, is super excited to be hosting a Hometown camp in Mansfield, MA at Mansfield High School for the athletes in their program. Join Babson College Head Field Hockey Coach Julie Ryan & her staff for a great week of camp. Camp open to 8th grader and older and members of Mansfield School District only. 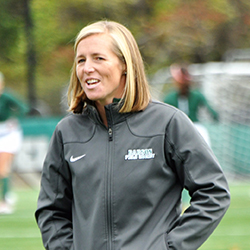 Julie Ryan enters her 11th year as Babson's head field hockey coach in 2017. The winningest coach in program history, she has led the Beavers to an overall mark of 136-72 over her first ten seasons. The Green and White put together the best season in program history last fall when it went 21-3, won its second NEWMAC championship title, since 2010 and was the first women’s sport at Babson to advance to a NCAA Division III Final Four.

Ryan has led the program to five conference regular season crowns and guided the Beavers to two NEWMAC Tournament championship titles and third NCAA Tournament berth. A four-time conference coach of the year, she was selected twice as the NFHCA New England East Coach of the Year in 2010 & 2016 and has posted a program record of 21 victories this fall.
A native of Brewster, Massachusetts, Ryan came to Babson from nearby Boston College, where she served as the Eagles' assistant field hockey coach from May of 2005 until June of 2006. After her term as an assistant, she worked as an intern in the BC Athletics Department while serving as the head coach of the BC Club Field Hockey Team and the Worcester County United U16 Team.

Prior to her arrival at BC, Ryan worked stints as an assistant field hockey coach at both Springfield College and Yale University. She has also coached at numerous field hockey camps throughout New England, including the US Field Hockey Association Futures Program, while serving as director of the prestigious Revolution Field Hockey Camps.

Ryan enjoyed a brilliant playing career while at Quinnipiac, earning Northeast Conference Player of the Year, Academic All-American, First Team Regional All-American, and NFHCA Division I Senior All-Star honors in 2001. A four-year letterwinner who served as team captain during her senior season, Ryan was selected as Quinnipiac's Female Athlete of the Year award, and in 2010 she was inducted into the school's Athletics Hall of Fame. In 2012 she became a double-inductee in the Quinnipiac Hall of Fame, as her 2001 team was honored after becoming the program's first to reach the NCAA Tournament at the Division I level.

In addition to her current role as head coach, Ryan also serves as Babson's equipment coordinator. She resides with her husband, Pat and two sons, Jake & Sean, in Milton.

Age & Ability: Camp is open to Rising 8th grades and older of all ability levels.

COVID-19 Protocols and Guidelines-  We recommend that each camper bring their own hand sanitizer. For more info on our guidelines and protocols, see the link below;